I checked the web first thing to verify that the RER line B was working properly (I.e. not on strike). The flight was scheduled 30 mins. late as the incoming was delayed in flight so we took a little longer getting ready. We now know the ropes.  Waking to the Metro, metro to La Chapelle,  walking to Gare du Nord, RER to CDG on the slow train, fighting the crowds to get to the Air Canada check in, printing tickets and baggage tags, customs and security. All of this took just 1 hour and 35 minutes which must be a record. We sauntered down to the gate stopping for a coffee and a final excellent croissant at Fauchon.
And this is where the story really starts.
Departure was further delayed for an hour or so then they had to take on extra fuel. There was freezing fog at CDG so there was a further delay while the aircraft was de-iced. Visibility was very poor - possibly a hundred yards or so. I have never taken off in freezing fog before.  It must have been exciting  from the cockpit barrelling down the runway at full throttle with a heavy plane full of fuel and passengers and not to be able to see the end of the runway. It was great to break out into the sun above the gloom.
By this time we had missed our connection to Ottawa in Toronto.  Not to worry as Air Canada will have a table at the connections area with new boarding passes for us. The table was there but no boarding passes. We had to go upstairs and check in again. Then the Air Canada computers went down. I managed to get boarding passes out of a machine but it wouldn't print new baggage tags. The check in lines weren't moving. With a little prodding I managed to get to a check in person who sorted out the baggage tags and told us that next time the computer knows of any flight changes so the old tags would have been fine.
All this to say we arrived home just two hours later than planned.
It was -15 and, wonder of wonders, the 97 bus driver didn't need a pee break so we got right in to a warm bus - otherwise we would have had to wait outside in the cold looking at a warm bus.
Ottawa is a winter wonderland as all the trees are covered in ice. We can enjoy the results of the freezing rain without having to put up with it.
With all the good eating over the last 6 1/2 weeks I was delighted to find that I have actually lost 3 pounds. It was a fantastic trip.

Posted by Colin Churcher at 9:51 AM No comments:

The Bastille Sunday market is reputed to be the largest in Paris. It stretches in four rows of stalls from the Bastille to the Bréguet-Séguin metro station along the covered portion of the canal. It is big, but the  unofficial market under the Metro bridges at Barbès Rochechouart must come a close second. Lots of choice and an amazing selection of foods, prepared and unprepared, as well as wine, clothes, knick nacks, tools. etc. The Place des Vosges was very pleasant and we walked through the Marais before returning to Lévis. 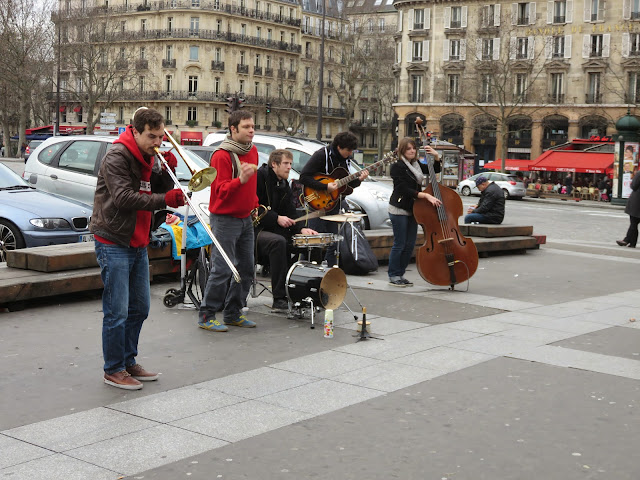 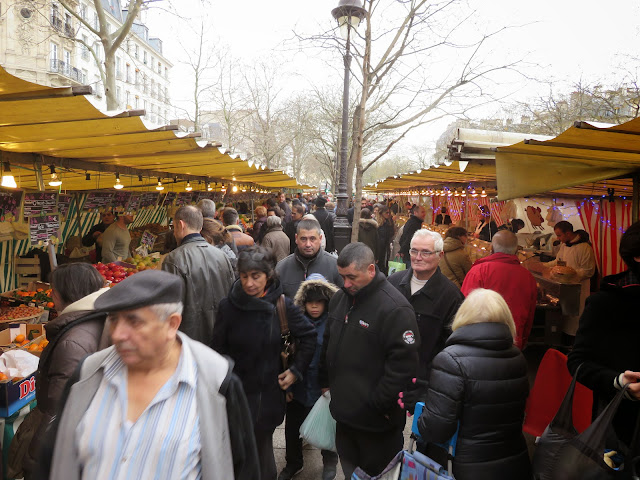 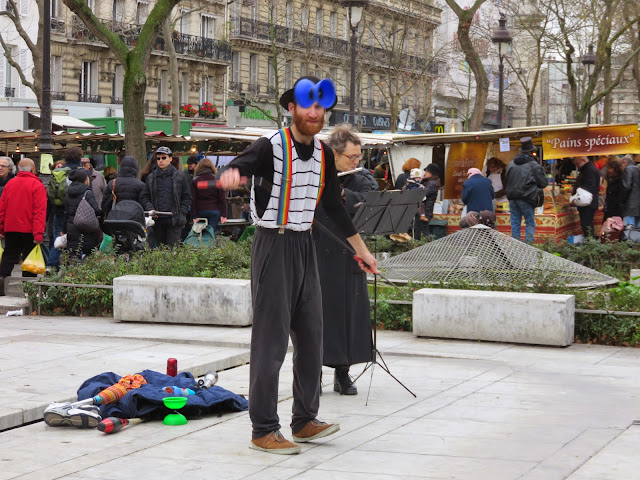 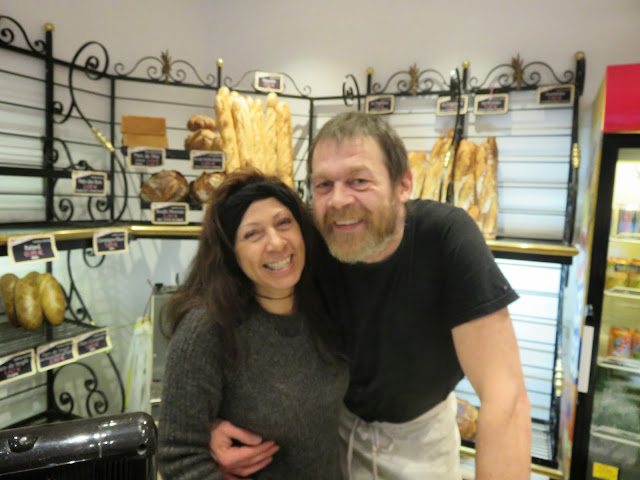 We said good bye to our friends at Diva et Chocolats
Posted by Colin Churcher at 8:31 AM No comments:

It was raining most of the day. Not heavily but enough to make it unpleasant. We abandoned the idea of a walk in favor of watching rugby, reading and getting captions on the pictures in Flickr.

Posted by Colin Churcher at 1:15 PM No comments:

Paul and Karen return to Canada tomorrow and we prepared dinner. There was a captured Époisse, called Horace, in the fridge that was let out into the kitchen where it percolated sullenly to itself. Some serano ham, carrots and red peppers crawled out and were sacrificed on the cutting board. A nicely roasted chicken was tracked down. Baked potatoes were persuaded to join in the fun along with some pate de canard en crout.  At Pascal Caffet, four macatartes were jumping up and down in their display case until Mary liberated them. A small galette du roi was tracked down at Diva et Chocolats along with a couple of baguettes traditions.

After this exhausting preparation Mary and I went for a short walk in the warm sun.  A circuit of Monceau Park with its plaque to the first parachute jump in October 1797, was followed by rue des Malsherbes to rue Jouffroy to Pont Cardinet and the Square des Batignolles.

Paul and Karen brought a bottle of  white Valais wine from Basel which turned out to be very good. We finished off a number of bottles of wine and cleared the fridge somewhat ready for our departure on Monday.

Posted by Colin Churcher at 11:17 AM No comments:

The first sounds I heard from the street this morning were cawing from a couple of crows nesting in the roof tops further down. I went with Karen and Paul to ride trams this morning. Public transport was free until noon and we made good use of this. This is not so much of a benefit to Parisiens as it may seem because in many areas fare evasion reaches 40%.
We went to Saint Lazare and took the train to La Defense. It was a beautiful day with a clear blue sky although it was very frosty in places.
Tram T1 took us to Porte de Versailles. The views towards the Eiffel Tower and the Seine were very good in the sun.

At Porte de Versailles we took a coffee in a cafe to use the bathroom and then took T3a all the way to Porte de Vincennes. The T3b took us to the Metro 7bis. We just made it through the turnstiles at 1155. Buttes Chaumont was looking good in the sun. There were many family groups and joggers. The gulls were walking on the thin sheets of ice that had formed overnight. We had to pay to get back to Villiers.
The organ concert at La Madeleine had a good first half with pieces by Delalande, Daquin and Bach, the Bach Prelude and fugue BWV 552 was extremely good. However we should have left at the interval. Perin, the organist, played melodies from The Sound of Music which would have been more appropriate for the organ in the Blackpool Tower in front of beer swilling holiday makers.  Better yet, sitting naked doing a Monty Python.  The organist's own improvisations on themes of noel was a painful disaster. He should stick to playing the organ rather than trying to compose

The food was extremely well done.  However, the service, although very polite and friendly, was off hand and slow.
Posted by Colin Churcher at 8:20 AM No comments:

I went out to Barbes Rochechouart and was surprised to find a street market set out underneath the Metro bridges towards La Chapelle. It must have stretched 400 yards. I had wanted to get pictures of the approaches to the Gare du Nord and Gare de l'Est but this was not possible because of the wire fencing and restricted views from the overbridges. I took a picture of the front of the Gare du Nord but this was even difficult because it is so vast.
The St. Quentin market was interesting and I found a large Wallace fountain inside this covered market. It did not look as if it had been used recently.
With time to spare I came back to Villiers by bus - a lady got on carrying two scraggly Ostrich feathers.
We had our New Year's meal, as usual, at Aux Îles Marquises. We were greeted by Mme. Thiery as old friends. M. Thiery, the shef, came out to speak to us as well. The meal was up to the usual superior standard and the menu had been lightened a little. The scallops with black truffles (which I forgot to photograph) were a welcome variation as was the lobster soup, a broth with much lobster.
We started with a bottle of champagne, progressed to an excellent white Sancerre and then to a Saumur Champigny red. Madame accepted our reservation for next year although there is the possibility that they will have retired by then.

Posted by Colin Churcher at 10:27 AM No comments: