On the way through Yverdon les Bains yesterday we noticed three standard gauge open cars on narrow gauge skates. The Yverdon to Ste, Croix railway was obviously moving sugar beet so we returned early to Yverdon this morning. Shortly after we arrived a train of three open cars on skates arrived behind one of the older passenger motors. The small wheels made quite a noise as it entered the yard. The crew set to work and we were able to see the complete transfer between gauges from the safety of the SBB platform and right close up. The operation was carried out on the track next to the platform and we weren't trespassing.
First, the crew uncoupled the air brake hoses between each skate and released the brakes. The motor then pushed the train so that the open cars ran up a standard gauge ramp while the skids were pushed underneath at ground level. The motor was replaced by the "crocodile" and an SBB diesel arrived with three empties. The SBB removed the loads and pushed the empties in over the train of skids. When each wheel dropped down the ramp it engaged a skid and released it to roll forward.  The following skid was held back until the next wheel dropped on to it when it, too was released by the action of the wheel. The crocodile then pulled the train of empties back and propelled it on to the motor which was coupled with a bar coupling. The air brake hoses were then attached and the empties left, after a brake test, about half an hour after arriving.
To see pictures of the Yverdon Ste. Croix railway including the transfer click here
We then rode the next service train to Ste. Croix and passed the motor in a siding where it had picked up three loads and the three empties were being loaded. The climb up to Ste. Croix is spectacular with  views over lake Neuchatel.  The final part is through a steep sided valley.  We returned to Baulmes. Last time we were here we had regretted not having lunch at the hotel. This time we went straight to the hotel bar and asked if we could come back for dejeuner. The answer was yes but it was civet de chevreuil which was fine by us. This gave us about 20 minutes to look around the village which has an enormous hotel de ville and a large number of horse troughs all dating to about 1869. We were inspected by a large number of cats.
Back at the restaurant there was a group of 13 retirees who meet here every other Thursday. They were having the same as us. The meal was great and we had half a bottle of the wine from this area which the proprietor proudly displayed for us. Everybody had a good time. The lady of the house came out to ask if we had enjoyed it and wondered if we wanted seconds! We were sorry to leave but we had a train to catch. We had been in Baulmes for just an hour.
Out third objective today was to ride the Fribourg funicular which was closed when we were here last. We took the train to Fribourg and quickly found the funicular. It is powered by filtered waste water. The tank in the top car is filled and this hauls the lower car up. It us the only funicular of this type. The speed is controlled by the Riggenbach rack.
To see all pictures of the Fribourg Funicular click here 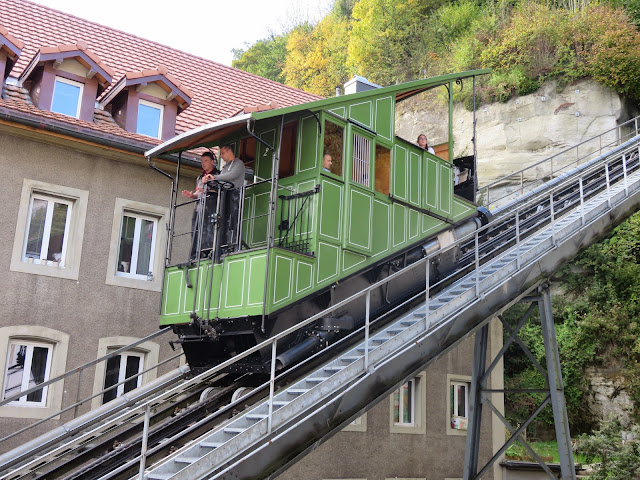 We had a pleasant walk around the lower area, caught the funicular back and took a Fribourgois train to Ins where we took the Aare Seeland mobile train through very pleasant arable country with woods and lakes to Biel/Bienne. A tilting train brought us back to Neuchatel past the two lakes with a wonderful backdrop of mountains.
Rabbit and hare for supper.
Posted by Colin Churcher at 2:51 PM No comments: