We left the hotel early to ride the Polybahn a short funicular close by. However there was a big line up of school kids so we contented ourselves by photographing it.
The train to Bern was the usual double decker and we went over the only high speed line in Switzerland.
It was cloudy in Zurich with a trace of rain but the sun was out by the time we had reached Bern.
Time between trains at Bern for tram and train watching. Bern is very busy with an interesting curve at the north end of the station.
We decided to take the slow train on the Bern Lotschberg Simplon railway because it went on the Lotschberg pass, the faster trains go underneath on a long tunnel. This turned out to be a good decision as the weather was very sunny and the views superb. As we anticipated the rooms were not ready anyway so there was no point in getting to Martigny earlier. There is a distinct change between Brig (German) and Martigny (French).  Martigny is untidy and grotty and there is nowhere as much pride in the place as we experienced further east. This is much more like France.
We took the opportunity this afternoon to ride up to Le Chable and Orsieres, a standard gauge line into the mountains to the south. Leaving Martigny the train was full and standing.  However there was a fair on the outskirts of town with free transportation. After the first stop we had practically the whole train to ourselves.
This is grape growing and fruit growing country and the steep mountainsides are heavily cultivated in many places to a high level. Martigny has a reputation for strong winds, as evidenced by several large windmills on the valley bottom. The Saint Bernard Express took us to Le Chable and back to Sembrancher where we transfered to the train to Orsieres and waited for the connection from Martigny. The valley to Orsieres is very pleasant, well forested with mixed growth deciduous trees, tending to change to coniferous as we approached Orsieres which is too high for fruit.
Supper this evening was horsemeat steak, horse being cheaper than beef. 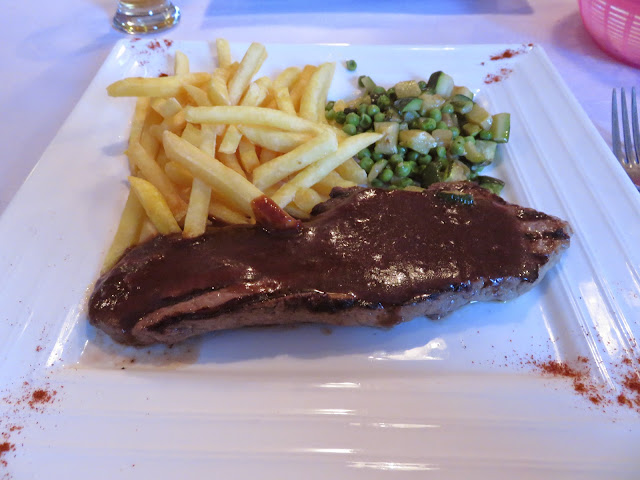 Posted by Colin Churcher at 4:37 AM No comments: