It was just finishing raining as we took the tilting train to Lausanne and a local train to Morges.
The narrow gauge line to Biere has nicely painted trains and stations. There is a feeling of prosperity about the line. The countryside is very rich agriculturally with sugar beet, vineyards, market gardening, sunflowers, corn and greenhouses.
The ride was pleasant rising gently to Biere. This is a small community but the railway serves s local army camp and firing could be heard on the range. The two locomotives on the line, similar to Rhaetian Railway were at Biere.
We took the next train back to Apples where there is a junction to L'Isle Mont La Ville. The branch train makes connections with trains to Biere and Morges.
L'Isle is a pleasant little place with a big laiterie and a river with plenty of ducks.
We returned to Apples and made the connection back to Morges. It was lunchtime and the train was full of kids making lots of noise.
At several places sugar beet was piled up at line side. There was a notice indicating that certain sections of the line would be closed next week for the sugar beet harvest. Replacement buses would be run.
Click here to see all pictures taken on the Biere Apples Morges Bahn

At Morges we watched the narrow gauge switcher negotiate a train of skids and then caught the train to Nyon.
The narrow gauge to St. Cergue and La Cure starts from an underground terminus close to the SBB. It has a different character to the Biere Apples line, other than it also carries a lot of noisy school kids. The country is mixed arable and pastoral but there is not the varied crops nor the vineyards. It climbs through woodland and terminates close to the border with France. There were wonderful views over Lac Leman and the mountains behind as we climbed higher and higher into the hills. At one time the line continued into France but this part was closed many years ago. Most of the kids were going to St. Cergue and there was a lady with them whom we thought was a teacher as she obviously knew them and was helping them with their homework. Turns out she was doing a survey of passengers and their tickets for the railway. She had been doing this since April. The kids must have been delighted with this assistance.
We came back to Lausanne for some train watching and a beer.
This evening we had a meal in the old part of Neuchatel. It is a great pedestrian area with some interesting architecture. 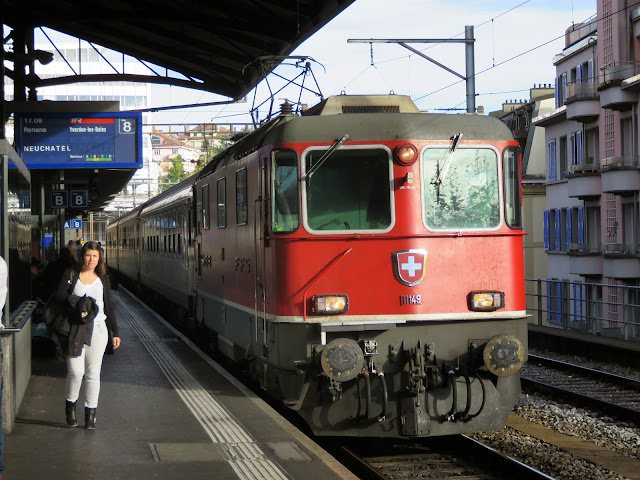 Posted by Colin Churcher at 10:10 AM No comments: